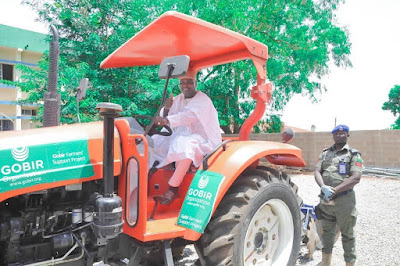 The Director of Strategy and Communication of the Gobir Organization Foundation Mr. Charles Olufemi Folayan has announced that the Gobir Farmers Support Project will move to Ilorin East and Moro Local Government Areas of Kwara State from Monday 15th of June, 2020.

He said, the Organization has attended to over 150 farmers in the last one month and have completed operations on about 100 hectares of land at a subsidized rate of nine thousand naira (N9000) per operation. Brand new tractors with ploughing, harrowing and ridging tools are being used, resulting in speedy and efficient operations.

He further explained that the tractors would continue to work on the farm land of the existing farmers in Kwara State. However, plans are in top gear to kickstart the training of young farmers for the Gobir Smart Farm Project as soon as the ban on public gathering imposed by the Government as a result of the coronavirus pandemic is lifted.