Revocation Of Ile-Arugbo: A New Evidence Against Saraki Emerges 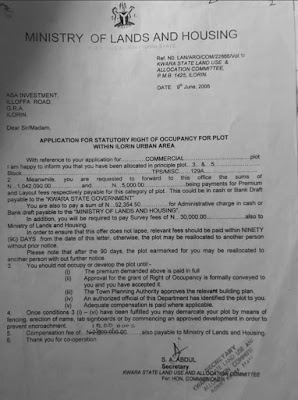 With regards to the revocation of Ile-Arugbo, a new evidence has just emerged confirming further the shoddy circumstances under which the plots of land became Saraki’s in the first place.

This medium has reliably laid its hand on a transactional letter which requested that a particular sum of money be paid to the state government to complete the transfer of ownership to Dr Olusola Saraki.

The letter, which was addressed to Asa Investment, was titled “APPLICATION FOR STATUTORY RIGHT OF OCCUPANCY FOR PLOT WITHIN ILORIN URBAN AREA.”

The letter also demanded that the sums applicable be paid within ninety days from the issuance of letter or the plot may be allocated to another applicant without prior notice.

What is, however, missing is the evidence of payment that and official agreement that legitimize Saraki’s use of the plot of land.

Attached with this post is the photo of the letter for those who might want to confirm.

Recall that in the last few days, the entire matter of land revocation has become an avenue to exchange tirades with the Kwara state government. And instead of Saraki to thread the path of an honourable man by keeping silent or challenging the case in court, he bursted with rage and storm.

Here right before the public is a new evidence that indicts his father. It remains to be seen whether Saraki will provide the public with a counter-evidence to prove the state government wrong.