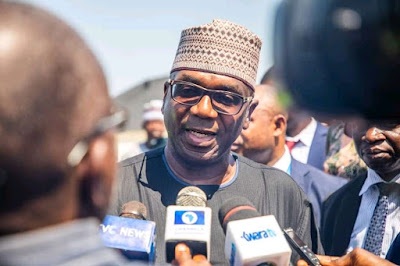 
Kwara State Governor AbdulRahman AbdulRazaq on Thursday denied that the government was behind the popular musical concert that featured pop star WhizKid in Ilorin, adding however that the event was a welcome development and could be a springboard to promote entertainment and get local talents hooked to other talents from outside the state.

He laughed off claims that the administration spent N200m to organise an end of the year party, saying those behind the claims were the people who brought the state to its knees and thought everyone was like them.

“The WhizKid concert was not sponsored or funded by the state government. It was purely a private sector initiative,” the Governor said in his remarks at the public presentation of a pictorial compendium of the appalling state of infrastructures and social amenities across every sector in Kwara.

“We however would continue to support such enterprising initiatives so that Kwara can better tap into the potentials in the entertainment and creative industry. Ours is to provide the enabling environment for such initiatives. Those who said we spent N50m to bring WhizKid also said we spent N200m on the end of the year party. They also said I bought bulletproof cars. These are laughable claims.

“Their strategy is to say that we are like them and tar us with the same brush. We are not. We are prudent with public resources. As at today, I still drive my personal cars as official cars. I bought them before I was sworn in. Although the law allows me to buy such vehicles, it is not a priority for me. We need to fix our state first.”

Stressing the need to grow the entertainment industry and empower talented youths, AbdulRazaq said he requested a meeting with WhizKid in his house yesterday where he sought a partnership to empower local talents especially the Kwara Idol and other programmes that have grown the creative industry.

The event, which was attended by House of Assembly Speaker Yakubu Danladi Salihu, cabinet members, civil society organisations, scholars and community leaders, was organised by Kwara Development Trackers (KDT), a nonprofit platform of apolitical Kwarans who are driven by the need to urgently fix the huge infrastructure deficits in the state as captured in the compendium.

AbdulRazaq said the compendium was a challenge for him to deliver more to the people, noting that the rot he met on the ground has forced the administration to rethink his campaign manifesto in line with the current realities.

The Governor said his strategy for a better Kwara included putting in place the necessary infrastructure to attract investment, such as massive rehabilitation of schools and health centres, engaging and training the necessary manpower, and making the state a hub for innovation and enterprise.

KDT Convener Barrister Muritala Sambo said the compendium was put together to point up the infrastructural needs of the state.

“This is done with to provide the new government and the people of Kwara State with an encyclopaedic information of people’s needs and the state of development across the state,” he added, warning that the effort was not to rubbish anyone but to set the record straight and challenge the new government.

Ahmad Moyosore, who represented Professor AbdulRasheed Na’Allah as the guest speaker, said fixing the state requires the collaboration of all stakeholders like the government, civil society organisations, development partners, and philanthropists.