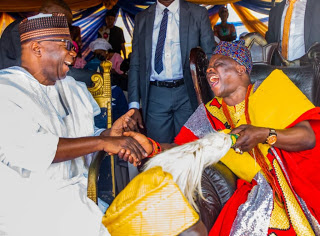 Kwara State Governor AbdulRahman AbdulRazaq on Saturday bagged a chieftaincy title of Soludero of Offa Land as he attended the 8th edition of the Ijakadi Festival, a celebration of the culture and history of the ancient town.

AbdulRazaq arrived the Offa stadium venue of the colourful festival in his signature low-key manner at exactly 11a.m. — way ahead of any other government officials or dignitaries who later met him on the seat.

“This is the eight edition of Ijakadi festival and His Excellency is the first Governor to attend this programme. I'm giving him the title of Soludero of Offa Land. That's a mark of our appreciation for your coming. This event is about our love for equity, justice and fairness. We have always shown the way not only in Kwara but in Northern Nigeria. We are always helping our community,” the Olofa said.

AbdulRazaq, for his part, acknowledged the self-driven development initiatives and resilience of the Offa people and how their support in the run up to the election had been very decisive in the Kwara’s political struggle.

“The Ijakadi Offa Festival typifies your resilience and ingenuity as a people and this has continued to make you critical stakeholders in the socioeconomic and political space of Kwara State. I urge you to never relent in this regard because healthy competition — devoid of destructive jealousy — is key to development,” he said, restating his administration’s commitment to grow culture and tourism in the state.

“The 2020 budget contains provisions to promote our cultural heritage as Kwarans as well as project our festivals to the world as part of our efforts to making tourism a major revenue earner for the state.

“The Kwara we used to know was renowned for the entrepreneurial spirit of its people. Our people were not always dependent on handouts from any government but things changed along the way following a deliberate effort to impoverish the people. Even then, many people and communities resisted such tendency. I am proud to say that the people of Offa stood tall during those dark years. I must thank you for that.

“Going forward, this administration will promote qualitative and inclusive education, enterprise, and sustainable development with all seriousness. The 2020 budget has pointed in that direction and your own son is at the centre of our developmental initiatives as the commissioner for enterprise.

“One of our upcoming projects is the renovation of the Offa Grammar School. We have completed the tender process to rehabilitate the Offa water works to strengthen sanitation and public health. We have recently fixed the Popo Road, while we have also awarded the construction of Tipper Garage-Amuyo-to-Adesoye College road.”
News