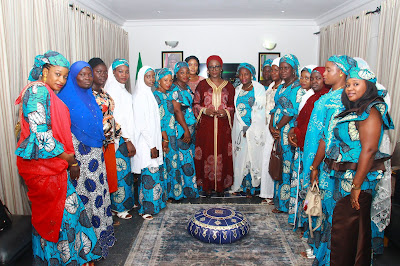 The Wife of the Kwara State Governor, Mrs Olufolake AbdulRazaq has charged wives of political office holders to support their husbands in the cause of discharging their duties.

Mrs AbdulRazaq gave the charge today in Ilorin when she received wives of Members of the Kwara State House of Assembly who paid her a courtesy call.

The First Lady emphasised the need to put efforts together to address the growing cases of drug abuse in the state.

She solicited the support of the group to stage a Gender Based Violence walk on the thirtieth of this month in line with the mandate of the Northern Governors Wives.

Mrs AbdulRazaq explained that the Northern Governors Wives had decided to focus attention on issues around Gender Based Violence with a view to addressing the menace in the society.

She explained that her foundation, Ajike Scheme was also making efforts across the state to empower women through skill acquisition programmes.

Mrs AbdulRazaq added that her office was supporting Base ball and softball across the state in order to engage youth and reduce restiveness.

Speaking earlier, the Leader of the team and Wife of the Speaker, Kwara State House of Assembly, Mrs Saadatu Danladi had called for collaborative efforts in promoting the welfare of women in the state.

Other speakers appreciated Governor AbdulRahman AbdulRazaq for women inclusion in governance and appealed to him to sustain the support to the womenfolk.
News