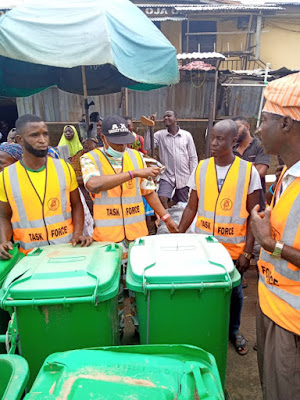 The Kwara State government Environmental Task Force adhoc committee set-up by Kwara State Governor, AbdulRahman AbdulRazaq have been working round the clock to ensure that the state, especially Ilorin the state capital is kept clean and green while ensuring that the indiscriminate dumping of refuse along waterways which has caused flooding in the different parts of the state is totally stamped out.

The government is also aware of the epidemic this unwholesome act of waste disposal could cause; a reason why the Governor in his stride to make governance total and egalitarian, constituted a committee to curb this disturbing trend that had for a long time turned the state capital to a rather filthy Capital City.

The Task Force working on the instructions of the Governor earlier today presented waste bins to market women in the major markets in Ilorin in order to ease the burden of waste disposal and achieve their target goal of clearing the streets of garbage heaps.

Presenting the waste disposal bins to the market women through the Iya-Loja General, Alhaja Sidikat Akaje, the ad-hoc committee which includes Ibrahim Akaje, Yinka Bello, Oloyin Lateef Adebayo, AbdulRazak Jeddah, Kayode Oyin Zubair, Obasanjo Alashi and Musbau Esinrogunjo reiterated the government's readiness to fight indiscriminate waste disposal head-on and reassured the market women that government will cooperate with the leadership of the various market associations in a bid to ensure stipulated rules are strictly adhered to by other marketers and members of the public.

Alhaja Sidikat Akaje responding on behalf of the market women from Ipata, Oja Tuntun, Oja Oba, Gegele and Oja Ago appreciated the Governor's resilience and determination to ensure that Ilorin metropolis is safe for residents and visitors alike. She promised on behalf of the marketers of her association's continued support to the government at all times.