NANS Members Attack Each Other Over Free Ticket To South Africa 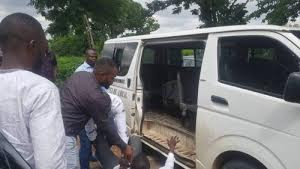 Two factions of the National Association of Nigerian Students on Wednesday in Abuja engaged each other in a brawl over plans by the South African High Commission to sponsor some of them to the country.

President of National Youth Council of Nigeria, Bello Shagari, who led the group, was in company with the President of Students Union Government of the University of Abuja.

Acting South African High Commissioner, Bobby Moroe, after a meeting with the students’ leaders said his country was planning to engage Nigerian youth on a cultural exchange visit.

He said the motive behind the visit was to further tighten the existing relationship between Nigeria and South Africa.

Moroe noted that the trip would enable the NANS members meet with their South African counterparts as part of measures to resolve attacks on Nigerians in South Africa.

However, trouble started when President of NANS, Danielson Akpan, and other executive members stormed the South African High Commission and claimed to be the authentic representatives of students in Nigeria.

He said those invited for the meeting were impostors and not the executive members of NANS.

He berated the group for tarnishing the image of the student union and for accepting such offer while their compatriots were being killed in South Africa.

Akpan’s faction thereafter descended on members of the other group, who had been inside the high commission building early.

It took the timely intervention of the police to arrest the situation. Sahara Reporters