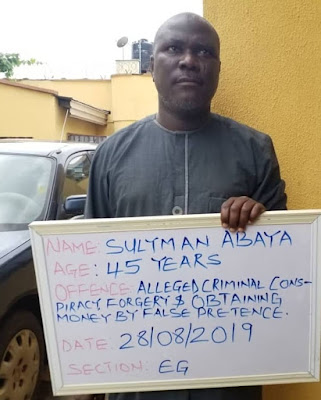 The Economic and Financial Crimes Commission has no reason to threaten or apologize to one Sulyman Abaya, a lawyer and one of the suspects being investigated in a N20 million property fraud case by the Ilorin Zonal office of the Commission.

Abaya was  arrested along with two other lawyers, Salman Rafiu and Saka Hammed, for alleged illegal acquisition and sale of a property belonging to Mr Adetunji Adedoyin, valued at about N20 million (Twenty Million Naira).

Adedoyin alleged in a petition that the suspects fraudulently obtained a court judgment  with which they claimed and sold his property without his knowledge and consent. .

In getting the judgement, the suspects ensured that their victim, the petitioner did not get summons. Instead, they went ahead and provided defence lawyers for him, with whom he never  had any discussion.

According to him, "I was informed that I was served summons all through the court proceedings, whereas it was R.A. Salman who put up his colleagues: Abaya Sulyman and Saka Hammed to stand for me and these lawyers forged my signature on some documents purporting my consent in court to the sale of my hostel."

Adedoyin further stated that "The truth of the matter is that I never set my eyes on these people (lawyers) prior to or during the court proceedings, neither did I participate directly or indirectly in the proceedings. I also was not aware of the proceedings from the beginning to the end."

Abaya was arrested on August 28, 2019 and released on bail after volunteering statement to the Commission. However in a twist, the suspect addressed the media in Ilorin on September 2, 2019, claiming he was innocent of the allegations against him and that operatives of the Commission, having realized their mistake, had apologized to him. He also added that he was profiled at gun-point.

To all intent and purposes, these are bouquet of lies packaged to elicit public sympathy and portray the Commission as inefficient, reckless and draconian.