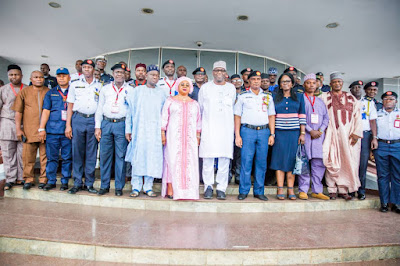 Kwara State Governor AbdulRahman AbdulRazaq on Thursday said the country’s internal security partly depends on the premium placed on effective fire service delivery, pledging to make such service a priority of his government.

“Everybody has a responsibility to prevent fire disasters in view of its ugly consequences. Equally, fire service delivery is a vital component of internal security. The issue of safety of life and property is therefore occupying a major place in the programmes of our government,” AbdulRazaq said at the 10th National Council Conference on Fire in Ilorin, the state capital.

“Our government takes fire prevention and fire fighting seriously. This is because we are quite aware of the devastating result of fire disasters, which, in most cases, destroy properties and wreck lives.

“As part of this administration’s commitment toward saving lives and properties from avoidable lost, the Kwara State Government has set machineries in motion to reposition and strengthen the Kwara State Fire Service for effective service delivery. I am glad to inform you that we have commenced rehabilitation work on the Unity Fire Station, Ilorin, to give Fire men a befitting office accommodation and this is just a tip of the ice berg. Other challenges of the State Fire Services shall be tackled one after the other in due course.”

He said fortunes and lives have been lost to fire incidents which could have been prevented if proactive measures had been taken, calling for strategic planning and action to halt the trend of fire disasters in the country.

“I want to remind residents of the State that when fire incident occurs and once fire gets out of control, it has no respect for class or creed. It becomes man's worst enemy. It takes no hostages. Its heat alone can kill, maim and destroy. It is therefore our collective responsibility to guide against it at all cost,” he added.

He commended the Federal Fire Service and the delegates for the conference which theme —Technology: An Imperative for Effective Service Delivery in the Fire Sector — AbdulRazaq said was very apt as every sector that is not driven by technology will be living in the past.

The Governor had earlier announced that he would allocate land for the establishment of the proposed Federal Fire Training School and the north-central regional office of the service in Ilorin.

He also said additional fire service stations would be established in the northern senatorial district of the state to complement the ones in Ilorin, in the central, and those in Omu Aran and Offa in Kwara south.

Speaking earlier at the event, the Federal Permanent Secretary in the Interior Ministry, Georgina Ekoma, commended the Governor for showing commitment to effective fire service delivery in the state.