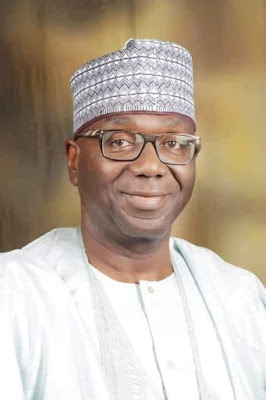 The Executive Governor of Kwara State, AbdulRahman AbdulRazaq paid a surprise visit to the Civil Service Clinic, Ilorin as part of his ongoing personal assessment of various sectors, facilities and service delivery framework in the state.

The governor who was welcomed to the clinic by the surprised staff and visitors went straight to interacting with all staff and was given a breakdown of their activities over the years.

While briefing the governor on their operations, the Doctor on duty, Dr. Ayinla told the Governor that they average over 100 births with less than 10 beds in the hospital. Dr. Ayinla continued that as much as they would have loved to be more effective in discharging their duties, they are faced with different levels of challenges owing to neglect by government over the years.

Dr. Ayinla told the Governor about the clinic's needed expansion and the inability to discharge their work at an optimum level due to the inability to access basic equipment needed to help them, crave the indulgence of the AbdulRazaq led government to assist in that regard. He said the provision of an ultra-modern surgical room will optimize the level of their work.

He further explained that the Clinic was naturally meant to be a Primary Health Care center, but they now offer both secondary and tertiary services which has made the job more tedious.

Dr. Ayinla also complained that they are short of expertise and the piled up challenges of years not attended to by previous administrations has further made it really impossible to work effectively. Part of the challenges listed include but not limited to; poor electricity supply, lack of adequate security, outnumbered wards and offices.

Governor AbdulRazaq promised to look into the challenges with the aim of solving them promptly as improving basic health care with the hope of reducing maternal death and ensuring every Kwaran get easy access to health facilities for various treatment remains dear to his administration. He lauded the staff of the clinic and charged them to continue in that stride as their welfare will be adequately looked into in order to keep them morally stable and motivated to deliver at best.

AbdulRazaq reiterated that the health of Kwara populace is one of his utmost priorities and must be treated as such. The governor also raised concern over the poor medical record keeping of government owned hospitals in Kwara at a time the world is digitalizing but stated that his administration can't afford to leave Kwara state in such an unspeakable condition he inherited from the previous administrations.