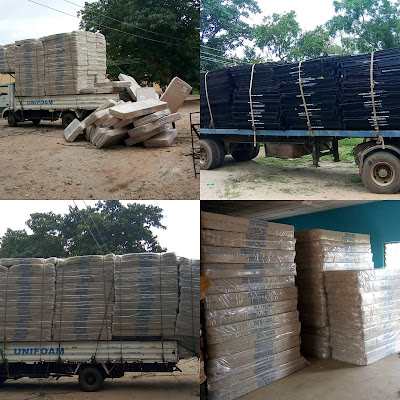 During the NYSC 2019 Batch B (stream 1) swearing in ceremony, the Kwara state governor, AbdulRahman AbdulRazaq visited the camp and bemoaned the state of the facilities, especially the living conditions of the camp. He expressed that the camp was a penitentiary and unfit for living while promising to take the challenge and improve the living conditions of the camp starting with the quick fixes followed by the more serious improvements that were needed.

In a bid to fulfil his promises he made at the NYSC orientation camp during his visit, Kwara State Governor has seen to the deliveries of supplies to ensure the wellbeing of NYSC officials and corp members at the NYSC Permanent Orientation Camp in Yikpata, Edu Local Government Area of Kwara State. This has earned him the 'talk and do' status in the state.

Today, the Nysc officials through the Kwara State NYSC Coordinator Mrs Esther Ikupolati received the delivery of 400 mattresses, 200 double bunks, 100 benches as well as medical supplies from Governor AbdulRazaq. This is coming just a little over one month after the governor's visit to the orientation camp, a feat which have earned more respect and adulation from the state.

In admiration of the governor for his swift response, the Kwara State NYSC Coordinator Mrs Esther Ikupolati confirmed the receipt of the materials and appreciated the governor for keeping his word and making them a priority. She expressed optimism that AbdulRazaq has made a record of being the first governor to step feet at the NYSC camp in more than eight years as well as being the first to see to the inhabitable state corp members at the camp have been subjected to over the years. It leaves more to be hoped for and an obvious departure from the norms of neglect.