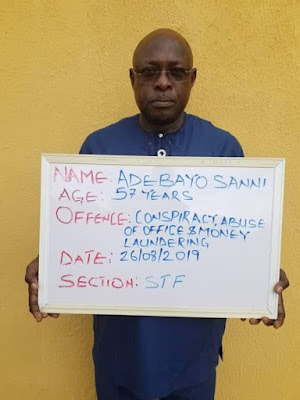 The Economic and Financial Crimes Commission, EFCC, Ilorin Zonal Office has arrested the Executive Director of Kwara State Harmony Holdings, Adebayo Sanni over his roles in fraudulent sale of some landed properties located at Harmony Reserved Area of Ilorin, the State Capital and Galadima area of Abuja, belonging to the State Government.

Those who benefited from the controversial land include, a close friend of the Immediate past Governor of Kwara state, Retired Navy Commandore J.A Taiwo, a Political Leader in the State, Ishola Balogun-Fulani.

Other beneficiaries who are still under the investigations of the EFCC are Alhaji Isiaka Oniwa, Alhaji Jimoh Adeshina, Mrs Olapeju Fausat Ogunlade and many more.

It was also alleged that Mr Sanni and the Retired Navy Commandore Taiwo who were said to be Classmates of the immediate past Governor, Alhaji Abdulfatai Ahmed converted some Kwara State Government property located in Ilorin and Abuja to their personal use.

Some beneficiaries who were grilled for several hours by the operatives of the Commission have started paying their monies while others promised to pay before the end of this Week.

The operatives of the anti graft body had gathered intelligence reports that some of the properties, Movable and Immovable, belonging to the Kwara State Government were diverted and shared by highly placed individuals between 2013 and now, which led to the arrest of the suspects.

As at the time of this report, the Kwara State Government Official is still being grilled by the EFCC operatives.