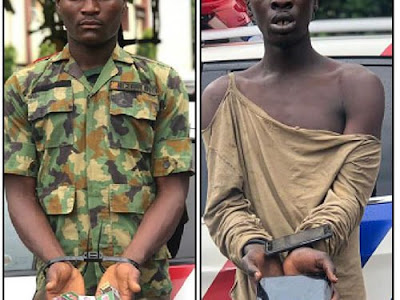 RAPID Response Squad (RRS) operatives have arrested one Yusuf Quadri, 22 years who posed as a soldier for allegedly violating a traffic law.

Yusuf, was nabbed while riding his motorcycle on Mobolaji Bank Anthony Way, Ikeja, during a stop-and-search by the RRS.

He was said to have told the RRS that he was a military officer, but investigation showed that he was an impostor.

The suspect, RRS claimed, admitted that he was a fake soldier, adding that he told detectives that he stole the uniform of a newly promoted military officer and took a photograph with it to produce an identity card.

He was said to have been using the uniform and the identity card to deceive security operatives, government officials and the public.

The suspect has been transferred to the State Criminal Investigation and Intelligence Department (SCIID), Panti, Yaba.