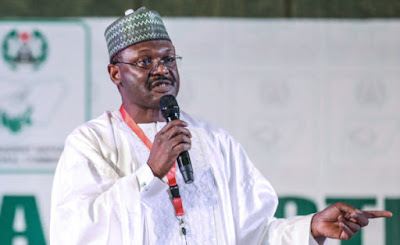 The Independent National Electoral Commission has apologized to the Nigerian Air Force for wrongfully accusing it of using its personnel to invade its premises in Rivers State and disrupt the collation of results in the protracted governorship and House of Assembly polls.

Nigeria’s Independent National Electoral Commission (INEC) chairman Mahmood Yakubu addresses the audience on February 25, 2019 in Abuja during the presidential elections announcement. – Muhammadu Buhari got off to a winning start in his bid for re-election as Nigeria’s president, as the first result was announced today from weekend polls. The 76-year-old former military ruler won 219,231 votes in the southwestern state of Ekiti, while his main opponent, Atiku Abubakar, got 154,032, the electoral commission announced.

It will be recalled that the Spokesman for the INEC in Rivers State had accused the NAF and other security agencies of invading its collation centre and disrupting the exercise thereby forcing it to discontinue the declaration of results, a development that is currently generating tension across the country and beyond.

But apparently realizing its mistake, INEC said on Tuesday that it had discovered that none of the NAF personnel was involved in the chaos that was recorded in the premises at the weekend leading to the suspension of poll results collation and announcement. In the statement absolving NAF entitled: “Inadvertent Involvement of the Nigerian Air Force in the Disruption of the March 9 2019 Collation Process”, INEC said it also discovered that the men in military uniforms were neither not from the NAF.

The statement which was made available to Vanguard on Tuesday was signed by the Head of Voter Education in Rivers State, Mr. Edwin Enabor for the Resident Electoral Commissioner, Obo Effanga. The statement said: “Further to our investigation and clarification from the NAF Command in Rivers State on the invasion of our offices/disruption of collation process by armed men in military uniforms, the commission wishes to state that the persons purported to have worn the Air Force uniforms were neither personnel of the service nor authorized by the service to be at INEC office. “The commission therefore wishes to express its regret at the embarrassment this might have caused the NAF,” INEC said.

The apology by INEC notwithstanding, its earlier claim at the weekend that military personnel took over its premises and hijacked the collation of results, has gone viral and attracted global attention, forcing some countries to issue threats against Nigeria.
INEC News